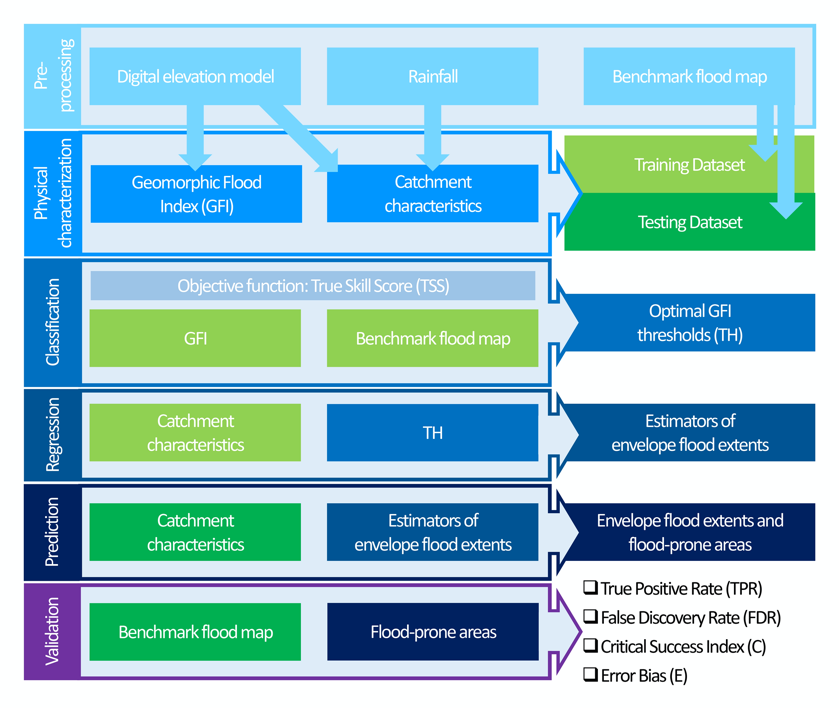 A topographic index (flood descriptor) that combines the scaling of bankfull depth with morphology was shown to describe the tendency of an area to be flooded. However, this approach depends on the quality and availability of flood maps and assumes that outcomes can be directly extrapolated and downscaled. This work attempts to relax these problems and answer two questions: 1) Can functional relationships be established between a flood descriptor and geomorphic and climatic‐hydrologic catchment characteristics? 2) If so, can they be used for low‐complexity predictive modelling of envelope flood extents? Linear stepwise and random forest regressions are developed based on classification outcomes of a flood descriptor, using high‐resolution flood modelling results as training benchmarks, and on catchment characteristics. Elementary catchments of four river basins in Europe (Thames, Weser, Rhine and Danube) serve as training dataset, while those of the Rhône river basin in Europe serve as testing dataset. Two return periods are considered, the 10‐ and 10,000‐year. Prediction of envelope flood extents and flood‐prone areas show that both models achieve high hit rates with respect to testing benchmarks. Average values were found to be above 60% and 80% for the 10‐ and the 10,000‐year return periods, respectively. In spite of a moderate to high false discovery rate, the critical success index value was also found to be moderate to high. It is shown that by relating classification outcomes to catchment characteristics the prediction of envelope flood extents may be achieved for a given region, including ungauged basins.