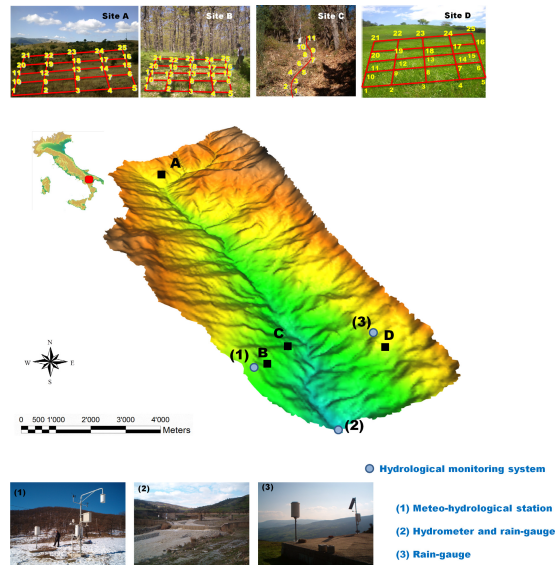 Soil moisture is a variable of paramount importance for a number of natural processes and requires the capacity to be routinely measured at different spatial and temporal scales (e.g., hillslope and/or small catchment scale). The electromagnetic induction (EMI) method is one of the geophysical techniques potentially useful in this regard. Indeed, it does not require contact with the ground, it allows a relatively fast survey of hillslope, it gives information related to soil depth greater than few centimetres and it can also be used in wooded areas. In this study, apparent electrical conductivity (EC a ) and soil moisture (SM) measurements were jointly carried out by using a multi-frequency EMI sensor (GEM-300) and Time Domain Reﬂectometry (TDR) probes, respectively. The aim was to retrieve SM variations at the hillslope scale over four sites, characterized by different land-soil units, located in a small mountainous catchment in southern Italy. Repeated measurements of ECa carried out over a ﬁxed point showed that the signal variability of the GEM-300 sensor (Std. Err. [0.02–0.1 mS/m]) was negligible. The correlation estimated between point EC a and SM, measured with both portable and buried TDR probes, varied between 0.24 and 0.58, depending on the site considered. In order to reduce the effect of small-scale variability, a spatial smoothing ﬁlter was applied which allowed the estimation of linear relationships with higher coefﬁcient of correlation (r 0.46–0.8). The accuracy obtained in the estimation of the temporal trend of the soil moisture spatial averages was in the range 4.5–7.8% v/v and up to the 70% of the point soil moisture variance was explained by the EC a signal. The obtained results highlighted the potential of EMI to provide, in a short time, sufﬁciently accurate estimate of soil moisture over large areas that are highly needed for hydrological and remote sensing applications.