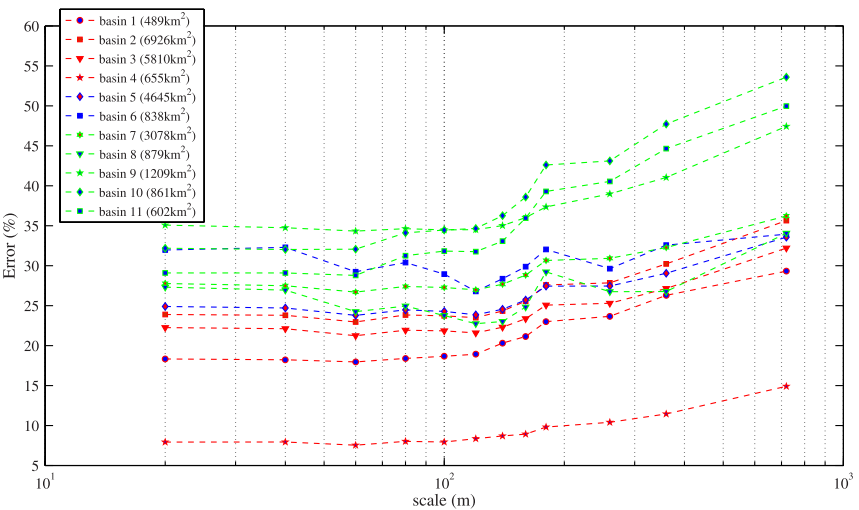 The availability of new technologies for the measurement of surface elevation has addressed the lack of high-resolution elevation data, which has led to an increase in the attraction of automated procedures based on digital elevation models (DEMs) for hydrological applications, including the delineation of floodplains. In particular, the exposure to flooding may be delineated quite well by adopting a modified topographic index (TIm) computed from a DEM. The comparison of TIm and flood inundation maps (obtained from hydraulic simulations) shows that the portion of a basin exposed to flood inundation is generally characterized by a TIm higher than a given threshold, τ (e.g., equal to 2.89 for DEMs with cell size of 20 m). This allows the development of a simple procedure for the identification of flood-prone areas that requires only two parameters for the calibration: the threshold τ and the exponent of TIm. Because the modified topographic index is sensitive to the spatial resolution of the DEM, the optimal scale of representation for the performance of the method is investigated. The procedure is tested on the Arno River Basin by using the existing documentation of flood inundations produced by the Arno River Basin Authority for calibration and validation. This approach is applied on 11 subcatchments with areas ranging from 489–6;929 km2 utilizing DEMs of different resolutions with cell sizes ranging from 20–720 m. Results show that the proposed procedure may help in the delineation of flood-prone areas, especially in basins with marked topography. The method is sensitive to the DEM resolution, but a cell size of ∼ 100 m is sufficient for good performance for the catchments investigated here. The procedure is also tested by adopting DEMs from different sources, such as the shuttle radar topography mission (SRTM) DEM, ASTER global DEM (GDEM), and national elevation data. This experiment highlights the reliability of the SRTM DEM for the delineation of flood-prone areas. A useful relationship between model parameters and the reference scale of the DEM was also obtained, providing a strategy for the application of this method in different contexts. The use of the modified topographic index should not be considered as an alternative to standard hydrological-hydraulic simulations for flood mapping, but it may represent a useful and rapid tool for a preliminary delineation of flooding areas in ungauged basins and in areas where expensive and time-consuming hydrological-hydraulic simulations are not affordable or economically convenient.