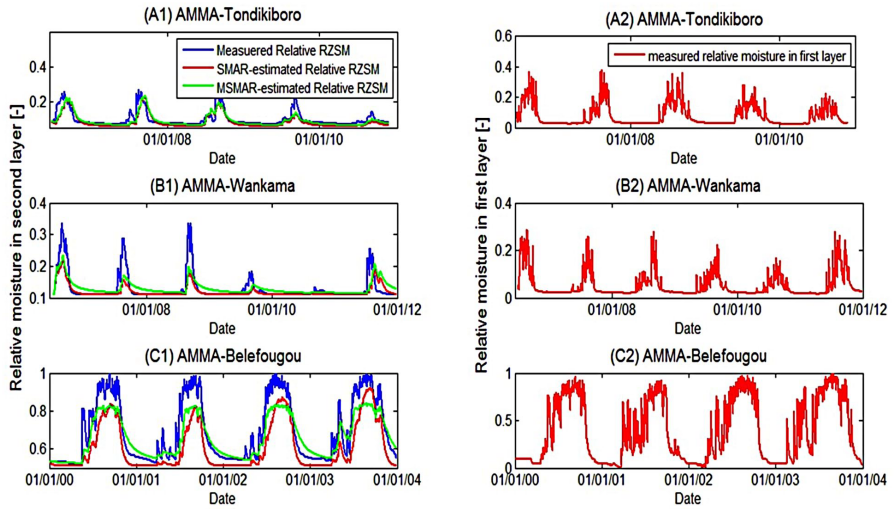 Root-zone soil moisture at the regional scale has always been a missing element of the hydrological cycle. Knowing its value could be a great help in estimating evapotranspiration, erosion, runoff, permeability, irrigation needs, etc. The recently developed Soil Moisture Analytical Relationship (SMAR) can relate the surface soil moisture to the moisture content of deeper layers using a physically-based formulation. Previous studies have proved the effectiveness of SMAR in estimating root-zone soil moisture, yet there is still room for improvement in its application. For example, the soil water loss function (i.e. deep percolation and evapotranspiration), assumed to be a linear function in the SMAR model, may produce approximations in the estimation of water losses in the second soil layer. This problem becomes more critical in soils with finer textures. In this regard, the soil moisture profile data from two research sites (AMMA and SCAN) were investigated. The results showed that after a rainfall event, soil water losses decrease following a power pattern until they reach a minimum steady state. This knowledge was used to modify SMAR. In particular, SMAR was modified (MSMAR) by introducing a non-linear soil water loss function that allowed for improved estimates of root zone soil moisture.